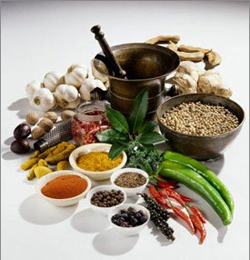 Ayurveda, the oldest healing science , encompasses the sum total of the experience and knowledge of great sages and physicians.. In Sanskrit Ayurveda means’ The science of Life’. The sages and rishis developed Ayurveda as a system of treatment based on the inherent ability of human body to rejuvenate,to heal and to restore its natural balance.

The roots of Ayurveda go deep into the soil of Kerala too , where it was practiced as far back as 5000 years ago , as in the rest of India and where the rulers of the day honoured and supported the physicians.Ayurveda in its purest form survived in Kerala because the geographical location of the state ensured that it remained untouched by the invasions, both foreign and domestic.

Ayurveda emphasises on prevention and encourages the maintenance of health through close attention to balance in ones life,right thinking, diet lifestyle and the use of herbs. Knowledge of Ayurveda enables one to understand how to create this balance of body,mind and soul according to one’s own individual constitution and how to make lifestyle changes to bring about and maintain this balance.

In Kerala every home grew some herbs , every family had their own Ayurvedic remedy for common ailments ,every child was taught the importance of regular Oil baths and Massages. The Malayalam month of Karkidakam ,which falls in July and August, is considered to be the ideal time for Ayurveda’s rejuvenating therapies and protocols. Sirodhara , Pizhichil , Njavara kizhi , Thalapothichil , Podikizhi etc. are some Ayurvedic procedures for which Kerala is renowned.

There are several unique herbal formulations that have evolved in Kerala. The vaidyars of Kerala are perhaps the most proficient in the world in interpreting the ancient Sanskrit Ayurvedic texts as well as evolving new protocols and treatments based on these texts.Today ,more than 12500 Ayurvedic doctors in Kerala keep this ancient healing system dynamically active.

Is it any wonder then that Kerala has become synonymous with Ayurveda, and Ayurveda with Kerala.